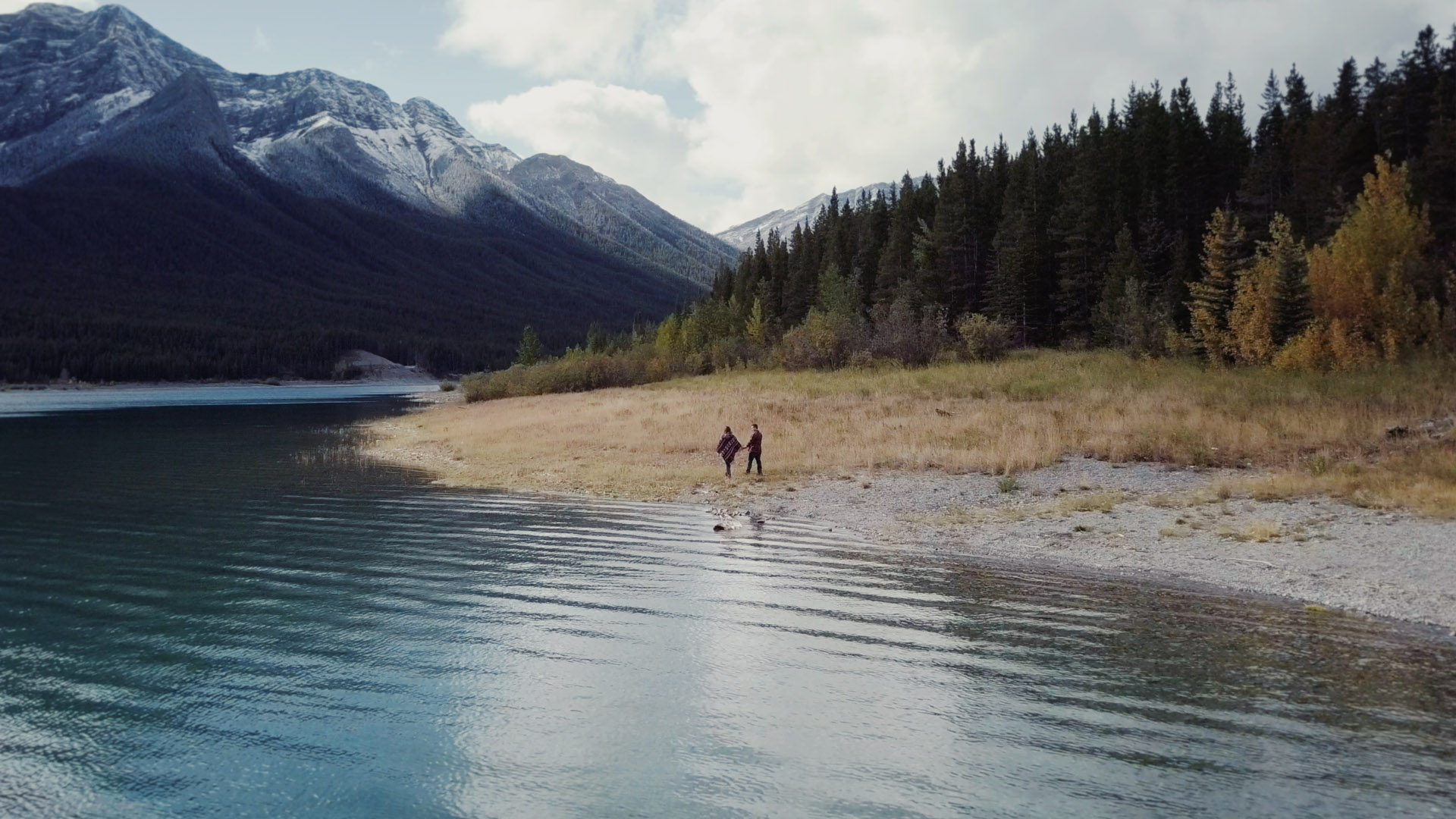 When I watch Tricia and Lake Louise Wedding Video in the Rocky Mountains, its not the ceremony, photoshoot or reception that I think of. My memory is immediately drawn to the first couple of hours when we met two bubbly personalities in a car park before heading out for a little excursion. Being a destination wedding we were there for a few days, so took the opportunity to shoot some extra footage the day before. We hopped in Ryan’s truck and let them take us up into the mountains.

An Inspiring Lifestyle Shoot in Canmore

I love these extra shoots right before weddings. Its a time when we can get to know a couple on a deeper level and let them bring us into their own world. Tricia and Ryan took as to a place we would never go other wise. Several kilometres up a dirt track to one of the most beautiful mountain scenes I have witnessed. It’s a place familiar to these guys and somewhere they were used to spending time. It was clear from the beginning that we wouldn’t need to give them much direction. We just pointed them towards a nice spot a filmed around them for a while. They laughed, joked and skimmed stones as if we weren’t there. Its pretty crazy when you think about it. Here they are,  being filmed in the middle of the most epic scene, and the world still melts away when they’re with each other.

Later, we headed back into Canmore and I asked if they would be up for a short interview session. You’ll read in other blog posts how I think of these as more of an informal recorded chat. It really is just me being interested in someone and learning a little more about their relationship. Its always an opportunity to add so much depth to a story, hearing someone speak without prepared vows, letters or speeches. You get that raw emotion. Raw story-telling. Real film making. It also means that couples get to hear those words from each other when they watch the film. Its a nice surprise and sometimes it means you learn something new. As you can see, Tricia and Ryan were totally open to this and let their hearts pour out. Amazing since we’d previously only chatted on Skype and met in person hours before.

This continued right through the wedding as well. There wasn’t a moment in the day when Tricia and Ryan weren’t fully living the experience. Whether they were alone, with friends, family or ourselves, the jokes and laughter continued.

It would be remiss of me if I didn’t talk about the actual wedding. And boy, what a wedding. Tricia and Ryan are adventurers, to the point where they’ll begin in Lake Louise, travel an hour and a half through Banff national park, get married in Canmore and go all the way back again for a reception. When I commented to Tricia that this was a longer than normal joinery (not that I was complaining, the drive is bucket-list worthy) she simply replied that it made total sense. After all, why wouldn’t you go to all those places on a wedding day? And she’s absolutely right. I mean, look at where we ended up? Why wouldn’t you want to do that? Sometimes you film weddings and a couple can take you on an amazing journey. Thanks guys, your wedding was a highlight of our year.

You can see more of our Wedding Films HERE. If you’d like to learn more about what we do, please CONTACT us!