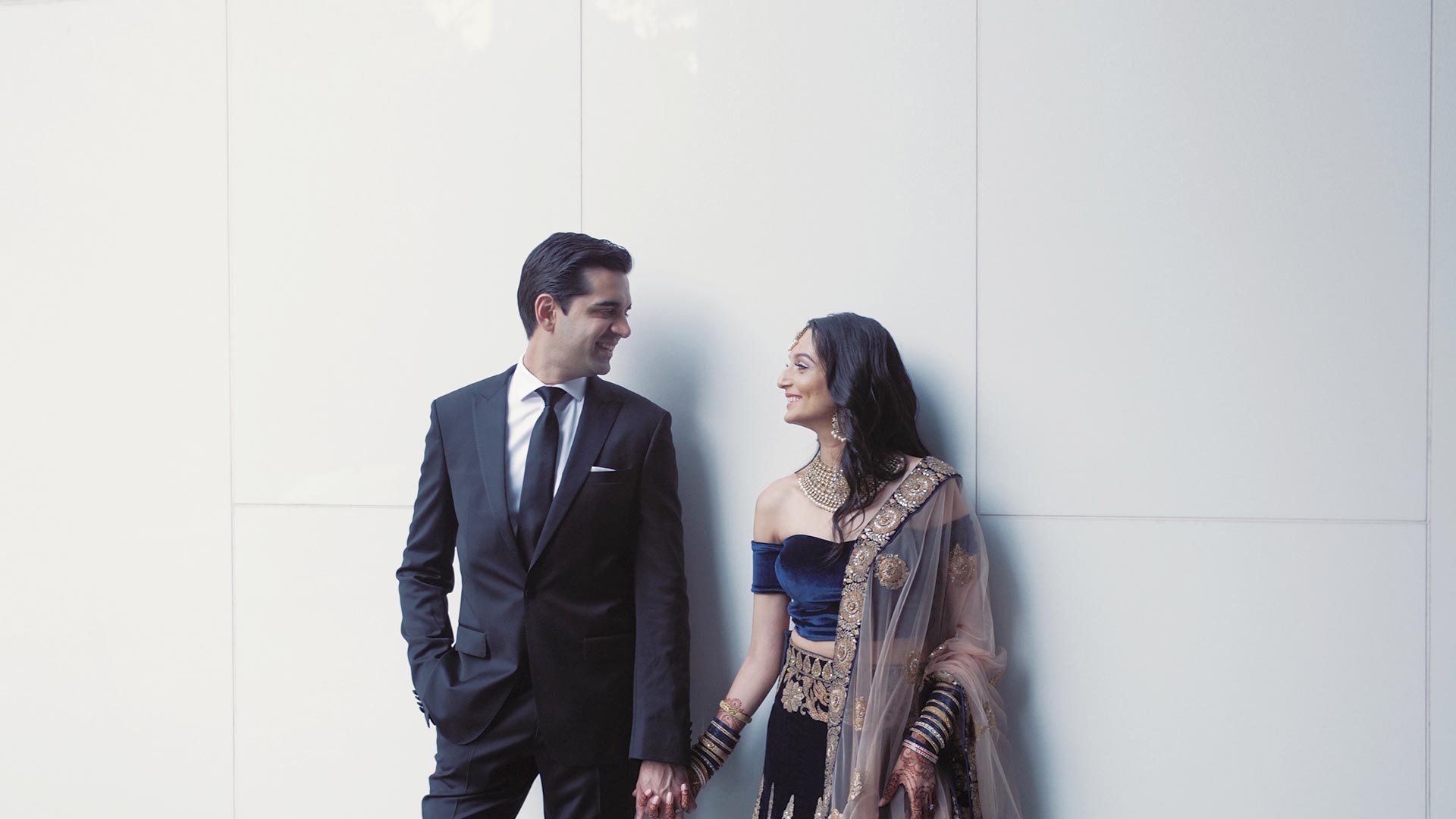 This wedding was HOT! Oh my, I think we were hitting 40 degrees at the end of June this year. Mona and Amit’s South Asian Wedding was split over two days The first day consisted of the ceremony at the Splendid Palais Royale. The second day was focused on the reception and was held at the spectacular Gardiner Museum in Toronto. Despite us spending much of the ceremony day by the lake, there was little respite from the humidity. I’m sure you’ll believe me when I say that a LOT of sweat went into making this film! But boy, was it worth it.

They may be “out oft owners” but Mona and Amit did a fantastic job picking out two beautiful venues. We’ve talked about Palais Royale before but the Gardiner Museum was a new experience for us. Both venues have so much character, mixing history with art and contemporary architecture.

I love it when a couple really thinks about the venues they pick. Your wedding is a mirror to yourselves in a lot of ways and a venue is a huge part of the wedding. So it makes sense to chose locations that reflect your tastes and personalities. When I think of Mona and Amit I think of two very sweet people. They are intelligent, worldly and appreciate creativity. They made this wedding theirs and put a very distinct “Mona + Amit” stamp on the event. And this makes for a better wedding film, because every frame tells you something about them.

The Importance of Crafting a Narrative

There are times where you just have to go that extra 10% and make sure you’re creating something special. When we met, Mona and Amit told me of their plan to write letters to each other. We talked about whether they would read them during their prep or as a part of their photo shoot. But being visitors to Toronto, running around in the week up to their wedding, writing letters in time for the big day proved a task too far.

But we’re not ones to let go. You can see from our work how important an audio narrative is to us. It forms the backbone of the story. Speeches are great, of course, but it is so important to hear from the couple themselves. Mona and Amit had a hindu ceremony and didn’t exchange vows, so making these letters happen became a priority.

So a couple of weeks after the wedding we met up in a park and Mona and Amit read their letters to each other. It was a beautiful moment and one which was made all the better for being away from the chaos of a busy wedding day. It’s not often two people will sit in a quiet park on a Thursday afternoon and open themselves up to each other in the same way. The words they say absolutely make this film and I’m so glad that we made this happen.

Susan from Beyoutiful Beginnings is a friend of Mona’s. She gets a special mention because not only did she help plan a very lavish affair. But she was also at Mona’s side thought out the day as a bridesmaid AND choreographed a surprise dance with Amit. People like Susan make weddings great and go a long way to improving our films.

Purple Tree photography picked some great locations to shoot in and we had great fun shooting with Evgeuni and his team. Blush Boutique made the girls look stunning and Henna by Ramnik was responsible for that beautiful Henna artwork. Lemon Truffle Designs and Floral Mystique provided all the fancy decor and of course, we can’t leave out iCake Bakery – the cake was delicious! Finally Empire Entertainment provided a stellar sound system and got the crowd up on their feet for a great party. Thank you to the vendors, your hard work adds so much to the film.

To see more see more of our Wedding Films click HERE. Please Contact Us for more information about our Cinematic Wedding Videography services.