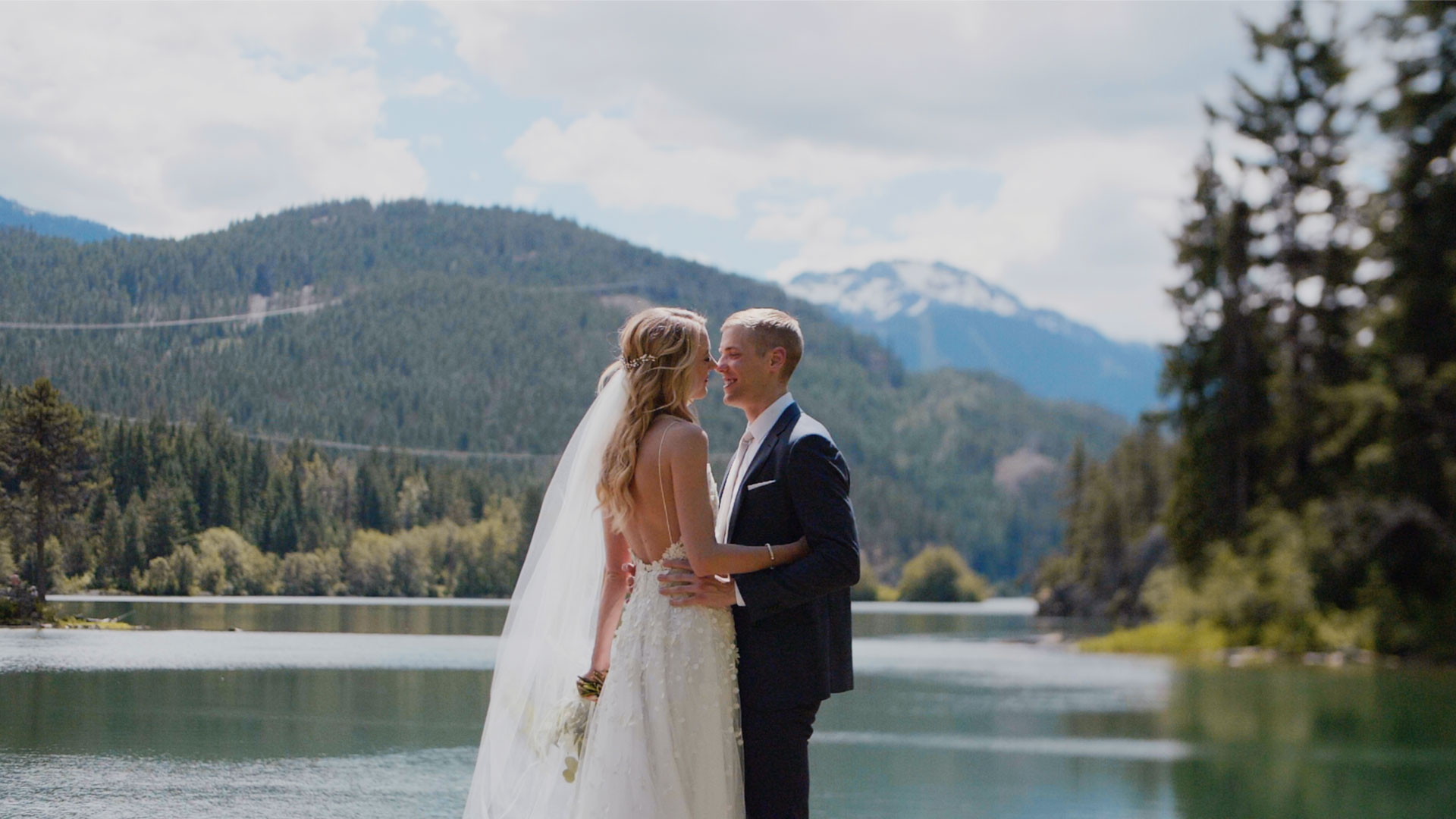 If you’ve been researching Wedding Videography, you’ll likely have heard the terms “Highlight”, “Cinematic”, “Portrait” or “Documentary”. We understand it can be hard to choose between each style or even know what any of those terms mean. So we wrote this handy guide to help you understand the differences between the films that we produce!

A Highlight Film is the staple product of the wedding videography world. It might also be known as a trailer. For some videographers it’s a simple montage set to an uplifting piece of music. For us, it’s a carefully assembled narrative illustrated by the very best visuals from your day.

We’ll chose a single, perfect piece of music that ties together all of the audio-visual elements that we have captured.  Often we’ll identify a theme or emotion that sums up the experience of the wedding and emphasize that through the vows and speeches. The Highlight Film may be short, but it’s the kind of video you’ll be watching, sharing and watching again.

We can confidently say that 5-7 minutes is often the perfect length for a typical 10 hour wedding. This length allows us to work with multiple themes and emotions. We’re able to expand important moments and use multiple pieces of music to “change gear” throughout.  The Cinematic Film raises the bar on typical Wedding Videography. It is our signature product and it’s typically what our clients book.

However, some couples plan such an epic day with so many important moments that even 5-7 minutes feels a little rushed. There might be multiple great speeches, love letters and story driven vows. You might have planned to go to multiple locations in the day and take us on a real adventure. In those cases, we always suggest an “Expanded Cinematic Film”. These are 8-10 minutes in length and perfect for couples like Rachel and Clark below.

When we set out to make a Cinematic film we’re thinking, “what can we do to learn as much as we can about this couple?”. We want to create a film that says something about you, not just your wedding day. We want a stranger to be able to watch your wedding video and feel like they got to know you.

Our Cinematic Films are different to most other wedding films because we REALLY pay attention to detail. Our focus is on doing all we can to produce the best wedding film possible. We spend ages assembling the perfect soundtrack, crafting a narrative and adding multi-layered sound design. In short, everything that we would put into making a “real” film is replicated when we make your Cinematic Wedding Film.

3) The Personal Portrait Film: So Much More Than a Wedding Video

Wedding Videography at it’s best. Our Portrait films build upon the Cinematic. At 6-8 minutes, we’re able to delve deeper into the story telling and world building. We find these films work best for couples who really recognize that we’re not just filming an event – but a significant time in their life.

Included in the package is a “Portrait Shoot” where we film you outside of the wedding day and perhaps conduct an interview session. We love interviewing couples for our Portrait films. It’s an opportunity for us to get to know you better and to capture unguarded, candid moments. Much of the audio that we use to establish the narrative is scripted. The vows, letters and speeches have all been pre-written. But when we’re just recording an open conversation we get to hear a fresh perspective. It just adds a layer of vulnerability and honesty to the film. Not all couples are comfortable with the idea, but if you’re thinking of having a longer film, we’d definitely recommend it.

We see Weddings as an excuse to make films about unique people. You’ve spent months, or even years planning an event which celebrates your personalities and life story. Your wedding is an illustration of who you are, complete with complimentary characters, scripts and performances. Inviting us to film your wedding gives us an incredibly opportunity to become fascinated with you. If you truly want the best wedding videography experience, a Portrait film is the way to go.

4) Same Day Edit: Re-live Your Day Before it’s Over

We probably put together 2 or 3 same day edits each season. They’re great fun and we love the fast paced production and high pressure delivery. It takes us back to our days editing highlight segments for News and Sport TV.

We always recommend Same Day Edits as an addition to a wedding videography package, rather than the main focus of a film package. This is because the editing time is far reduced from our normal films which are designed to be a keepsake forever. They also don’t include coverage of the reception or speeches.

Having said that, Same Day Edits are often a highlight of an evening and create such a buzz within the room. You’ll have an awesome video to watch and send to friends as soon as your wedding is finished!

5) Feature Films and Long Documentaries: The Best Way to See it All

Most couples will add one of our longer-form videos to their film collection. It’s a great opportunity to see more (or all) of your vows, speeches and other important parts of your day. Both of our Documentary and Feature films are chronologically edited with events unfolding as they did at your wedding.

The Documentary edit is closer in editing style to what you might consider “typical” wedding videography. It is 30-60 minutes long and allows you to watch through your wedding footage in an entertaining format. Other wedding videographers may refer to this as a FOMO edit or “mom and pop” film.

The style of a long documentary film can vary wildly in the wedding videography world. Some simply deliver a long timeline that is essentially raw footage. Others will synchronize all the live sound, but still deliver a video that is quite dry. Our documentary films are edited over a dynamic music bed with live sound mixed in. They also include the (nearly) full ceremony and speeches, which are edited to synchronized live sound.

The “Feature Film” (short documentary) is around 15-25 minutes long and is a more condensed version of the Documentary edit. They key difference is that it has more of a narrative style, with the best parts of the speeches peppered throughout. The ceremony is edited down to the key moments and we allow the vows to play out in full. Check out Faye and Brandon’s Feature film below:

When it comes to wedding videography, discussing Raw Footage can be a bit of a minefield. Some vendors flat out refuse to provide it while others essentially see it as an opportunity to “tax” their clients.

We think raw footage can be very valuable to a couple which is why we only charge a nominal fee to cover the hardware costs and time to purchase, organise and deliver (in fact we include it for free in larger packages). However, it’s always important to know there is a caveat; you need to understand what raw footage is and what it isn’t.

The raw footage that we provide is unprocessed and straight from the memory cards of our cameras. It means that there’s an extra backup somewhere in the world, which is always a good thing. It gives you piece of mind that you have everything we filmed in your possession.

However, raw footage isn’t synchronized, edited or colour graded video. There will be moments where the camera moves or is out of focus while we set up our shot. You will only hear live sound from the camera’s microphone, and not from the microphones we attach to you. The image you see will likely lack vibrance because we shoot our films with a “Log” or “flat” colour profile. This maximizes our ability to manipulate colour in post production. Finally, in order to produce films of the highest quality, our cameras are set to capture high-bit rate 4K video files, which require powerful computers to play smoothly.

As we mentioned Raw Footage can be incredibly valuable to many couples, but we truly believe that you’ll make more of your wedding videography experience by adding a longer film to your collection. Reviewing raw footage is a completely different experience to watching a finished scene. We think it’s important to remember that this is something you’ll want to watch on repeat.

We hope this post helps you understand your wedding videography options a little better. You can learn more about our services by contacting us HERE. Or just go ahead and check out more of our wedding films HERE.